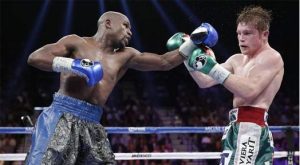 After seventeen years in the ring, Floyd Mayweather Jr. proved that he still has it. On Saturday night in front of a crowd of 16,746 at the MGM Grand Garden Arena in Las Vegas, Mayweather defeated Saul “Canelo” Alvarez by majority decision to solidify his junior middleweight world titles.

Alvarez, the Mexican hero of sorts, was fighting for his country on a symbolic night. This weekend is the celebration of Mexican independence. He was, however, no match for the much more experienced Mayweather.

Mayweather landed 46 percent of his punches to 22 percent for Alvarez. The judges scored the fight in favor of Mayweather 116-112, 117-111, and 114-114. The third judge, C.J. Ross scored the fight a draw. She is the same judge that gave Timothy Bradley Jr. a decision over Manny Pacquiao.

It didn’t matter for Mayweather, now 36, as he landed his right hand pretty much at will against the younger and much bigger Alvarez. By fight time, Alvarez, who made weight at 152, was back up to his more normal weight of 165. Mayweather fought at 150.

The weight difference also didn’t matter to the champ who was elusive all night and made it tough on Alvarez. He landed two hard rights in the third round and then another massive one in the fourth that snapped Alvarez’s head back and caused him to retaliate with a low blow.

Mayweather is now 45-0 with 26 KOs is his career. He walked away with somewhere in the neighborhood of $12 million for the fight. He says he will fight next May and September as part of a 30-month deal with Showtime/CBS. A possible opponent could be junior welterweight champion Danny Garcia.

Saturday’s fight is expected to set a record for the highest grossing match in boxing history. The gate drew $20,003,150, a record, and the fight may have drawn more than the record of 2.44 million pay-per-view buys. Which was set back in 2007 for the Oscar de la Hoya vs. Mayweather bout.