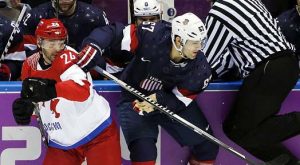 T.J. Oshie got hot at just the right time. After three periods and a five-minute overtime, Oshie scored on four of his six attempts in the shootout as Team USA defeated Russia, 3-2, in Olympic hockey on Saturday.

After U.S. goalie Jonathan Quick stopped Ilya Kovalchuk, Oshie converted his fourth shootout goal against Russian goaltender Sergei Bobrovsky for the victory. The Americans will face Slovenia on Sunday in their final opening round game. A win will put Team USA into the quarterfinal round of play.

The game started slowly as the two teams felt each other out and neither team scored in the opening period. Pavel Datsyuk opened scoring at the 9:15 mark of the second period. Cam Fowler tied the game on a power play goal at 16:34.

Fans at the Olympic hockey arena got their money’s worth in the third period. American Joe Pavelski put the U.S. ahead 2-1 about halfway through the period, but Datsyuk struck again converting a power play at the 12:44 mark of the period.

The Russians then appeared to have the game-winner, a slapshot by Fedor Tyutin from the left point that went over Quick’s left shoulder. The goal was waved off though as the net was dislodged prior to the puck hitting the net.

With the Russian crowd very much alive, the two teams ended the final period tied at 2-2. The teams played a five-minute overtime that was an absolute frenzy. Both teams had multiple scoring chances and Bobrovksy stopped the best. Patrick Kane had a breakaway opportunity, but the Russian goaltender stuffed him.

The game went to the shootout where Oshie shined. Not known as much of a scorer with the St. Louis Blues, Oshie is known for his shootout prowess. His final goal in the eighth round of the shootout gave the U.S. their second win in the tournament and almost guaranteed a quarterfinal berth.

The match-up between the two teams brought back memories of the 1980 “Miracle on Ice” when a group of American amateurs – professionals were barred from playing in the Olympics at the time – upset the Soviet national team, ranked No. 1 in the world.