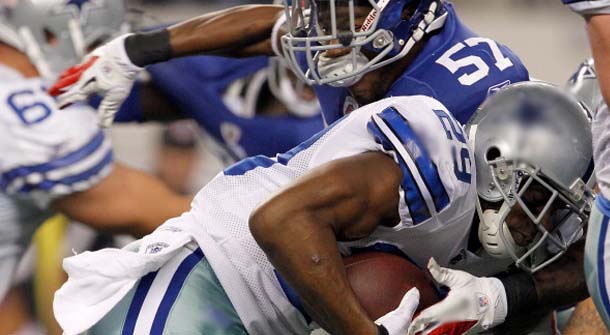 Pro Football was back in full swing and there was no shortage of surprises and story lines in NFL Week 1. Check out the recap of what you may have missed.

Week 1 of the NFL 2012-2012 season officially kicked off this past Thursday when the Dallas Cowboys traveled to Metlife Stadium in East Rutherford, NJ, to take on the pesky defending Super Bowl Champion New York Giants in their backyard. In recent years the Giants had totally dominated the Cowboys, but last Thursday the stars aligned as America’s Team made a statement around the league.

QB Peyton Manning’s debut and performance with the Denver Broncos was a page taken from a Hollywood script. Manning, the four-time league MVP, made history by reaching 400 career touchdowns, faster than either Dan Marino or Brett Favre, the only other members of the elite 400 Club. Manning needed the fewest passes to reach the mark at 7,226. He would end the day with 253 passing yards and 2 touchdowns.

The game was a see-saw battle until Manning and the Broncos pulled away in the 4th quarter. The Broncos convincing victory over the always dangerous Steelers proved this newly revamped Broncos team is one to be reckoned with.

The Niners QB Alex Smith threw for a formidable 211 yards and two touchdowns. However, it was San Francisco’s defense which stymied the Packers’ offense for much of the game. Even when it appeared Green Bay was on its way towards notching one of its typical 4th quarter comeback victories behind QB stud Aaron Rodgers, Niners LB NaVorro Bowman secured a key interception late in the fourth to halt Green Bay’s momentum.

New Orleans Saints star QB Drew Brees threw for 339 yards/three touchdowns, but it was not enough to get by the surging Washington Redskins and their Heisman Trophy winner Robert Griffin III. In his NFL debut, Griffin III had 320 passing yards and two touchdown passes. The rookie looked like a seasoned veteran as he stunned the Saints and raised eye brows everywhere on Sunday afternoon.

In a relatively close game that was fought down to the wire, Arizona Cardinals backup QB Kevin Kolb replaced an injured John Skelton and threw a 4th quarter touchdown to edge Arizona over the Seattle Seahawks.

Atlanta Falcons QB Matt Ryan had a huge game with three thrown TDs and one rushing TD to lead his team to a rout over a stumbling Kansas City Chiefs team.

Detroit Lion’s QB Matt Stafford was clutch as he threw the game-winning touchdown with ten seconds left in regulation to down the St. Louis Rams.

Philadelphia Eagles QB Michael Vick and Cleveland Browns QB Brandon Weeden both threw four interceptions each. However, a late touchdown by Vick to TE Clay Harbor secured the one point victory for the Eagles.

Jay Cutler and the Chicago Bears beat up on the Indianapolis Colts in rookie QB Andrew Luck’s NFL debut.

The Cincinnati Bengals traveled to Baltimore in an attempt to defeat the Ravens, however with the Ravens being one of the most consistent teams of the past decade they easily handled the Bengals in a blow out win.

The AFC West rivals San Diego Chargers and Oakland Raiders met up in another West Coast battle to secure a top spot in the division along with the bragging rights that go with it and it was San Diego who topped off the Raiders.