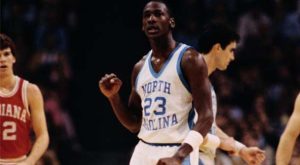 With the NCAA men’s basketball tournament just around the corner, we have been reflecting on year’s past and enjoying some of the greatest moments in the history of March Madness. There are many moments to remember when thinking about NCAA tourney’s past. Here is part two of our look at the top March Madness moments of all-time.

In 1966 with an all-black lineup, Texas Western (now the University of Texas-El Paso) beat an all-white Kentucky team coached by legendary Adolph Rupp and helped to integrate college basketball. Head coach Don Haskins and his squad overcame a lot of adversity that year to win. Not counting the racial issue, the Miners went to overtime to beat Cincinnati and double overtime to knock off No. 4 Kansas. The ‘66 Miners are brought to life in the film Glory Road.

A scrawny 6-foot-6 freshman hit a 16-foot jumper with 17 seconds remaining - the game’s winning basket - as North Carolina defeated Georgetown, 63-62, to win the 1982 national title. The freshman was, of course, Michael Jordan, and a star and an era, were born.

Just five years later in 1987, Indiana guard Keith Smart hits a jump shot from the baseline with four seconds left to give the Hoosiers the national championship. It would be the third title for Indiana coach Bob Knight.

The guru of “Go” and Loyola Marymount entered the 1990 NCAA tournament as a No. 11 seed and also without one of their stars, Hank Gathers, who had suddenly passed away during the West Coast Conference tournament. Paul Westphal, head coach and guru, led LMU on an emotional run to the Elite Eight. Gathers’ teammate and best friend, Bo Kimble, scored 45 points in a first-round win over New Mexico and then led LMU to wins over No. 3 seeded Michigan and Alabama. In tribute to Gathers, Kimble’s first free throw of every game was shot left-handed, just like his former teammate.

It is known now as simply, “the Shot.” With 2.1 seconds remaining in overtime and Duke trailing Kentucky, 103-102, Grant Hill threw a length-of-the-floor pass to Christian Laettner who caught it at the top of the key. Laettner took one dribble, turned and hit a fade-away 18-footer as the buzzer sounded and the Blue Devils were off to the Final Four for the fifth straight year. Laettner finished that game with 31 points and didn’t miss a shot. He was 10-for-10 from the floor and hit all ten of his free throws in what many believe was the greatest single-game performance ever in the tournament.

The Fab Five, possibly the greatest recruiting class of all-time, managed to get Michigan to the final game against North Carolina in 1993. With 11 seconds remaining and the Wolverines trailing, 73-71, Michigan’s Chris Webber called the most ill-fated timeout in the history of college basketball. Webber signaled for the timeout, but the Wolverines had none remaining. The Tar Heels wound up sinking four free throws in those final 11 seconds to give coach Dean Smith his second national title.

The essence of March Madness was evident in the 2006 tournament when underdog No. 11 seed George Mason, out of the Colonial Athletic Association, caps off its Cinderella season with a run to the Final Four. GMU knocked off Michigan State, North Carolina, Wichita State, and went to overtime to beat No. 1 seed Connecticut in the East Regional final and advance to the Final Four.

There are many more moments for us all to remember in the history of the NCAA men’s basketball tournament. These are just the highlights and with the 2013 tournament almost here, that list of memorable moments will surely grow larger.