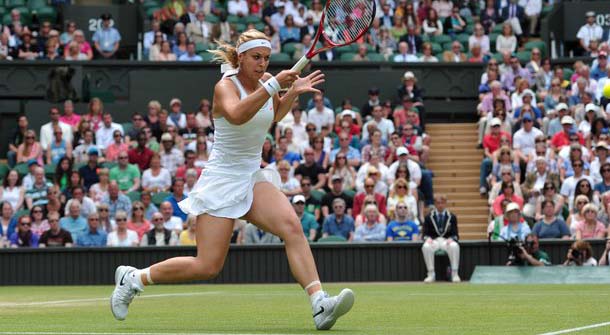 A virtual no-name, Sabine Lisicki of Germany will have a chance to win her first Grand Slam title by virtue of her 6-4, 2-6, 9-7 victory over fourth-seeded Agnieska Radwanska on Thursday.

Sabine Lisicki will face No. 15 seed Marion Bartoli on Saturday in the women’s final. Bartoli defeated Kirsten Flipkens of Belgium 6-1, 6-2. For only the second time in 45 years, the final will feature two players who do not have a Grand Slam title to their name.

It has been quite a ride for Lisicki. She upset five-time Wimbledon champion Serena Williams in the fourth round, ending Serena’s 34-game winning streak. In the semifinal against Radwanska, the 5-foot-10-inch German won the first set then promptly lost nine of the next 11 games and was trailing 3-0 in the third set.

Lisicki does well on grass; she is 19-4 at Wimbledon. She has a huge serve, reaching up to 122 miles per hour on Thursday, and powerful returns that allowed her to beat Francesca Schiavone in the first round, Samantha Stosur in the third, and, of course, Williams.

After winning her first five service games in the semifinal, Sabine Lisicki’s opponent broke serve five times in a row. Lisicki finally held again to get to within 3-1 in the third set. She then won five of six games and was serving for the match at 5-4. Twice, she was within two points of victory, but Radwanska managed to stave off defeat.

This year’s Wimbledon has featured several upsets in both men’s and women’s play. Most of the big-name players have been eliminated, including Serena Williams and Rafael Nadal.

The men’s semifinals begin today with No. 1 seed Novak Djokovic facing No. 8 seed Juan Martin del Potro. In the other, second-seeded Andy Murray takes on No. 22 Jerzy Janowicz. The men’s final is schedule for Sunday.